We’ve been heads-down focused on launch the last three weeks, but I wanted to follow up with another (quicker than usual) update. So let’s jump in.

So far, we’ve shipped over half of the Arsenal 2 units to our Kickstarter backers (Standard + Pro). While that’s strong progress, we’re not exactly where we wanted to be. I’ll break down where we are for each region below.

As I mentioned in the last update we were waiting for a number of cable types (SKUs) to be released from the air freight container yard in Seattle. Fortunately, those have been released, though not as quickly as we hoped and it happened in two batches (instead of one as we expected). The first batch is at our Bozeman warehouse and the remainder will arrive next week.

Based on the above, we expect all U.S. pre-orders to ship by February 25th.

The U.S. update above applies, with the added caveat that it will take a few extra days for our fulfillment partner in Amazon to receive and ingest the remaining Arsenal 2 units when they arrive. Given that, we expect all Canada orders to go out by March 3.

We started shipping from Hong Kong to Asia and Australia as expected. Many of these (of all USB types) have gone out, but the Chinese New Year slowdown and subsequent Hong Kong COVID spike has affected us more than we thought (we own part of this and should have accounted for a larger slowdown due to CNY). Given the COVID spike, I’m going to be conservative and say we’ll get the remaining units all shipped by February 25th, though hoping most/all will be done sooner.

While all other regions have begun shipping and have at least half shipped, Europe we, unfortunately, haven’t begun yet (outside of some BETA units and a few non-EU shipments).

As I wrote in the last update, our units have been stuck at customs for some time (some dating back to December). We kept being told they would be released soon, only for that not to occur. Yesterday we were finally given a “formal” firm date when the Arsenal 2s would clear customs and be available to us, and that date is 2/16 (we have pickup scheduled for that day).

Given time for the units to get to our fulfillment centers and be checked in, we’ll start shipping on February 23 and expect to finish shipping all Europe orders by March 4th. Germany and the Netherlands will go first (one of our fulfillment partners is central to that region and these will arrive quickly), followed by the rest of the EU and UK. Other non-EU European countries will go out a bit earlier, on par with the Asia/Australia schedule.

If your Arsenal 2 has shipped and you’ve been using it, you’ve probably noticed our weekly app updates. The dev team and I have been heads down working through bugs, enhancing features, and adding some polish to things. Arsenal is a very complex product and we support over 100 cameras. While some cameras are the same, most require some unique code to get them to work with Arsenal 2. We learned a lot from Arsenal 1 on how to test better, handle edge cases better, and how to quickly fix anything we miss. I’m happy to say that our bug list at this point is very small (something we definitely couldn’t say right after shipping Arsenal 1). We still have a few edge cases we need to track down, but really, the software side has gone very well and performance/experience are in a really good place.

For the last two months, the software team and I have needed to focus on bug fixes and testing, but with half the units now shipped, I think we can safely say we’re close to being back full-time on features. We had hoped to get more time to get Panorama out the door, but the rollout demanded quite a bit of dev time. That said, we’ll be back working on it shortly. We’re hoping to have it to beta testers late this month; we’ll keep you posted.

In the last update, we announced support for the Sony A1 and now we’re announcing the Sony A7 IV is supported. While most of our focus has been on launch, we were able to look at the Sony A7 IV and it was a pretty simple add, so we fit it in (sometimes we get lucky and the APIs don’t change a ton from one camera to the next evolution).

We’re very close to getting all of the Arsenal 2 pre-orders shipped and we’re so excited to see what you create. Thanks again for your patience and for all of your incredible support.

P.S. I included a few pictures of our US warehouse and Arsenal 2s going out the door. Thanks to Joe (our Fulfillment Manager) and everyone that’s helped pitch in to get units moving! 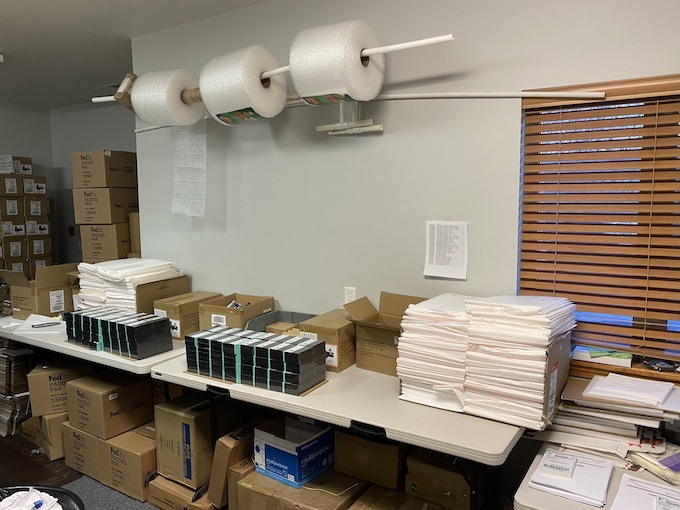 Hey everyone, Ryan here. As I mentioned in my last Update, I wanted to post a quick, weekly mini-Update…

Hey everyone, Ryan here. Arsenal 2s have begun shipping! I know many of you already know this, from getting…