This is the second post in a two-part series about Holy Grail timelapses. See here for Part One.

Hey everyone, picking back up from where we left off, today’s post is about how Arsenal looks to solve the challenges of getting a successful Holy Grail timelapse. I wanted to dive in a bit on how we accomplish this because I think the process is pretty interesting. I also think understanding the intricacies of Holy Grails a bit more will help you to take great timelapses with Arsenal once the feature is released. With that said, let’s jump in.

Arsenal is able to smooth between setting adjustments, react to changes in scene and lighting, and ultimately keep everything well exposed. We do this while producing timelapse frames that are exposed similar to how a human would expose them. Let’s take a look at a few graphs that show how Arsenal handles night-to-day transitions.

The above graph shows Arsenal’s auto exposure metering a scene. This is a timelapse from my house from about 1:00am until 9:00am. Slight changes in clouds and moon mean small variances during the night, then as the sun comes up, Arsenal smoothly ramps to handle the sunrise (lower values mean brighter).

This graph above shows the setting changes as things get brighter. Numbers on the left are in stops from a base number. Based on the Holy Grail range slider settings (we’ll cover that in a minute), the iso was reduced first, then once that hit base iso, aperture started increasing, then finally shutter speed.

Arsenal’s Holy Grail tab lets you control how you want settings to change over time using range sliders for shutter, aperture, and iso. You can set a low and high range for each and Arsenal will do its best to keep the settings it chooses in that range. Be sure to set the range large enough to handle any the lighting changes that might happen during your timelapse. You can change ranges while your timelapse is running and Arsenal will adjust settings after a few frames to maintain your requested ranges.

Different types of timelapses require different ways of adjusting settings. For example, shots with water often look good if you try to keep a long shutter for as long as possible. Timelapses with people moving around might need short shutter speeds. Sometimes you don’t mind it transitioning from one to the other. Last summer we did a timelapse that started with people around a campfire and ended with the Milky Way moving over our camp. In that case I wanted it to start with faster shutter speeds and low iso when there was enough light, and move to long shutters and higher iso for the milky way.

Arsenal’s range sliders let you choose how holy grail adjusts settings, and do so by acting like buckets for light. Once one bucket is full it spills down to the next one. Let’s say you have the following ranges: 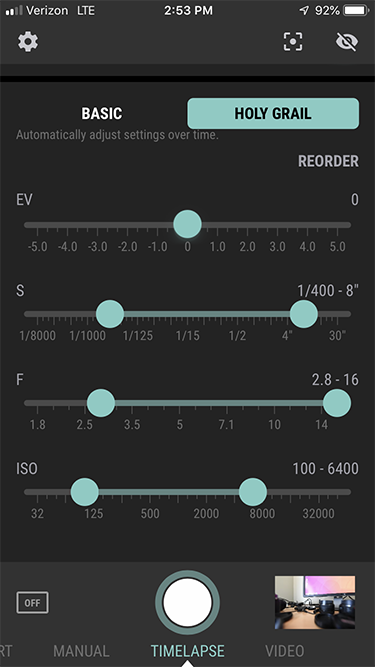 Imagine starting with the darkest scene possible. It would require the longest shutter, the highest iso, and the lowest aperture. n the case of the above ranges, that would be 8” shutter, f/2.8, and iso 6400. As the scene gets brighter, the settings would change in order to accommodate. First the shutter would move from 8” to 1/400. Once 1/400 is not enough to correctly expose the scene, it would start changing the aperture. Once the aperture had moved from f2.6 to f/16, it would start changing the iso. If things darken again, the sliders would move the other way, from the bottom up.

The “Reorder” button lets you change which settings are adjusted first. Just drag the sliders up to make them change sooner. For most timelapses, we recommend changing shutter first, then iso, and lastly aperture. Changes to aperture can change the vignette pattern of the lens, which can be distracting during a timelapse. If you know you’re going to need a really fast aperture, we recommend starting as low as you can and minimizing the range of aperture.

We’ll be doing a video tutorial soon to walk you through setting ranges.

You might have noticed the EV slider at the top of the Holy Grail tab. This behaves like normal exposure compensation, except instead of adjusting settings relative to the cameras auto-exposure algorithm, it adjusts them relative to Arsenal’s exposure algorithm. If you feel a scene is getting too dark, you can move the EV higher and Arsenal will adjust settings to brighten the scene (and vice versa).

Arsenal already has some great timelapse features, and I wanted to highlight them first before we move into the Holy Grail specific features.

- Real time preview You can watch your timelapse as its being shot. This makes it easy to see how things are going and make sure you’re not running into any issues.

- No phone required The Arsenal hardware manages the timelapse. The phone lets you change settings, review, and check progress. You can disconnect and reconnect the phone to the Arsenal any time.

Our holy grail adjustment tool has been a long time coming. A lot of things had to be built/tested to get our holy grail tool ready for production. In addition to the auto exposure algorithm and customizable setting ranges we talked about above, that includes:

- Smooth Ramping Within the ranges you set, Arsenal has smarts to change settings so you get a smooth, well exposed timelapse. Some changes (like headlights coming into a single shot) should be and are ignored by Arsenal. Arsenal balances possible fast light changes with damping to get adjustments without any significant jumps in brightness.

- Interval Management I think every timelapse tool I’ve ever used does something weird when the shutter time overtakes the interval time. Arsenal continually calculates the time required to save the photo to the card and copy the photo to Arsenal for holy grail calculations. It will do its best to keep the shutter speed short enough that the necessary saving/downloading can happen before the start of the next interval. If it gets where that's not possible either, you’ll get a big warning in the app and it will let the interval slip. In the future, we’re going to add a tool to warn you if it thinks the interval will slip at some point in the future.

- New Preview Generator We redid a lot of the system that generates the preview video. The new videos make better use of interframe compression. This means much smaller videos at the exact same quality. Actually higher since we also improved the quality settings. Previews for timelapses now come up faster, especially when you’re a ways from Arsenal and the bandwidth is lower.

- Improved Resiliency Ok, this one is cool. If you are running out of battery, SD card, etc., you can quickly turn the camera off, change things out, turn it back on, and Arsenal will pick up the timelapse where you left off. If you can do it fast enough, you won’t even notice the pause in the timelapse. We’ve also worked to try and make sure the camera keeps going even if the camera returns an error. Something like a bad sector on the SD card used to cause timelapses to stop, but now they will do their best to power through.

Timelapse Features Coming In the Future:

- Share the timelapse from the Arsenal mobile app We’re in the process of reworking photo sharing, and along the way we are also adding timelapse sharing right from the app. This is a feature we wanted to have from the beginning, but we needed to redo the preview generator first.

-Faster Intervals The minimum interval Arsenal can run Holy Grail at depends a lot on the camera. During each interval, Arsenal needs to trigger the shot, then the camera needs to write the photo to the card, and Arsenal needs to read back the photo and transfer it. Faster cards go a long way to making this process fast, as does shooting in RAW+JPG (or just JPG, though RAW is always good to have). During timelapses, to improve interval speed, Arsenal enables +JPG if only RAW is selected. We’ll be doing more work in the future to speed up the minimum interval Arsenal can run holy grail at and show previews. Some of this is limited by the camera+cards speed, but there’s a few tricks and improvements we can implement to reduce the current time. We will also be working on improving messaging around what the minimum interval is and ways to improve it.

- Post Smoothing This one didn’t make it out the door in the last release, but should be in the next one. Because Arsenal is limited to changing settings at 1/3rd stop intervals, there is still a little bit of flicker during the setting changes. We’ve got a really good deflicker algorithm that we’ve been working on. It smooths out these 1/3rd stop jumps.

- External Triggering (Slider support) This one didn’t make it into the beta release, but the Arsenal team has been field testing it for a while. For cameras that have a seperate trigger port (not one over USB, sorry Sony users), Arsenal’s timelapse shots can be triggered from an external device, like a slider using the trigger port. Arsenal will wait for the external trigger, then after a shot it will pull in the photo to add it to the preview video and calculate settings for the next shot.

If you’ve made it this far, congratulations! That was a really technical deep dive, but I hope it helps understand what Arsenal is doing and how it can help with your timelapses. If this seems like it’s just ‘too much’ or intimidating, we’re working on some content to help make this more digestible as we approach launching the feature. “How to’ guides, some recommendations on settings, and maybe down the road a ‘smart’ mode for Holy Grail are all in the works.

We’re really excited to hear more feedback on the feature, and we’ve recently expanded our BETA tester network to gather more. Once we get some more results there we’ll make any tweaks and release Holy Grail for everyone. I’m still looking for a bit more feedback before releasing, though I’m hopeful that will be quite soon. In the meantime, I hope everyone is enjoying their Arsenal!

Hey everyone, Ryan here. Our last update was posted in January, which is a bit longer than I wanted…

Why are Holy Grail Timelapses so Difficult?

Hey everyone, Ryan here with my first true blog post in a while. While I’ve focused on the…