Since our last update the Arsenal team has been working hard to solve the WiFi Module challenges caused by the global chip shortage. We’ve also continued to improve the Arsenal 2 software, and created some great tutorials. So let’s jump into some updates.

As we mentioned in our last update, the WiFi Module shortage is the remaining hurdle to manufacturing and launching Arsenal 2. Back in July we had set our target ship date as late October/early November based on what we were hearing from our contract manufacturer. At the time, we did not have a firm delivery date for the WiFi Modules given the extreme demand caused by the global chip shortage. We had a place in line (since December), but no guarantee of delivery date. However, we were told that a September arrival of the WiFi Module is what we should plan for.

Now in early September, we do have some good news. We have a partial shipment of WiFi Modules confirmed for late this month! That shipment (which we had to pay a premium for) won’t be enough to fulfill all of the Kickstarter backers, but we’re also being told that the balance of the Wifi Modules ordered will be delivered in late September or early October. That last part isn’t a guarantee, but given that we’re starting to see some chips we feel pretty good that it won’t be long before the balance arrives.

Given the above, we believe we’re going to end up pretty close to the last timeline we gave. We had a placeholder date with the contract manufacturer to make the Arsenal 2s in October , which we had to push back slightly to later in October given the above guidance. Taking all of the above into consideration, we’re targeting a November ship date, in the later part of the range we estimated in our last update (late-October/early November). While there’s still a hurdle to clear, I’m excited that we’re this close and can see the end of the tunnel on the chip shortage.

While we wait for the Arsenal 2 hardware to complete, the dev team and I are continuing to make performance improvements, fix bugs, and add some quality of life features.

When Arsenal 2 interfaces with Sony cameras, there’s two modes you can connect to when tethering. The cameras with the latest firmware (A7Siii, A7c, A7Riv) lets you connect in a newer mode that allows for faster commands and provides a faster way for us to get things like available apertures and shutter speeds. Running in the new mode required a lot of changes to the way we connect to these cameras, but will be a big win in the long run.

Our embedded engineer has spent a lot of time getting A2’s OS running on a mainline USB driver. There were a few quirks in the vendor USB driver that needed to be worked around previously. Once the new USB driver is fully in, we’ll be able to control camera charging through Arsenal 2, something that we’ll add an option for in the app (assuming we don’t hit any related issues). The Nikon Z6 and Z7 always attempt to charge from any connected USB-C devices, so disabling the camera charging can extend Arsenal 2’s battery life when needed.

The dev team has spent a lot of time tracking down some of the harder to reproduce bugs. We’ve knocked out some memory leaks, hard to fix segfaults, and even a few driver issues. Most of our git commits lately look like this: 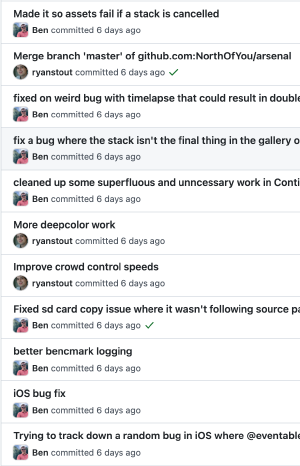 Thanks to Ben and Andrew for all of their hard work on some of these harder to reproduce bugs.

Because Arsenal 2 does so much image processing, there’s always more work to be done to speed up various operations (Deep Color, stacking, Smart Mode, etc..) Lately, I’ve been speeding up Deep Color processing times and working on limiting the RAM use so other processes can run at the same time. In addition to the speed improvement, this also improves the battery life since the CPU spends less time in the higher frequencies.

I mentioned previously that Lucian, our videographer, has been working on a full video tutorial series on Arsenal 2. Some of the videos are still being shot and edited, but today we’re releasing the first in the series, covering all of Arsenal 2’s timelapse features. There’s a lot to timelapses in Arsenal 2, so the video is longer than some of the others, but for anyone interested, you can watch below to get familiar with doing timelapses on Arsenal 2.

One software change to mention since the above video was shot, Arsenal can now pull down one photo while the next photo is shooting. This makes it so the gap between shots can be smaller. You can usually get away with a half second gap (so if you have a 3.5 second shutter, you can do a 4 second interval). Previously you might need a few seconds so Arsenal could pull down photos in the gap.

If you pre-ordered on our website, you can skip this section.

One other quick item - check to make sure the email associated with your Kickstarter account is accurate. If you’re reading this in your email, you’re good to go. But if you just found this on the Kickstarter site and didn’t get an email, check your profile. The email on your Kickstarter account is what we’ll use to email you the Pledge Manager, which we expect to go out in late September or early October. In the Pledge Manager you’ll be able to:

*We think all of the accessories are great, but the Phone Mount in particular is really helpful/convenient in a variety of situations. And it’s really popular too - over 65% of the pre-orders we get on our website include a Phone Mount.

Our primary focus right now is ensuring we get the remainder of the WiFi Modules as soon as possible. We’ll post another Update as soon as we hear more. In the meantime, the dev team will remain focused on optimizing Arsenal 2 as much as we can, and our videographer Lucian is continuing to shoot/edit some awesome tutorials. Thanks again for your incredible support throughout the Arsenal 2 campaign. More to come soon!

Hey everyone, Ryan here. For the last month our #1 priority has been solving the WiFi Module challenges caused…

Hey everyone, Ryan here. The Arsenal team has been very heads down since our last update, primarily focused on…