Hey everyone, Ryan again. First off, I wanted to let everyone know that things are going well and we’re on track with the April shipping timeframe! I know that’s the #1 question on everyone’s minds and we’re excited things remain on track. As promised we’ll be sending out emails in the coming weeks to confirm your cable selection and shipping address.

Also, I know it’s been a while since our last update. It has been challenging to balance wanting to give you all thorough updates as well as focusing on getting Arsenal out the door with great quality. We’ll aim to be better at that going forward, and Nate from our Marketing team will be helping to drive more updates and more content.

While we wait on a few last things, the team and I have been hard at work improving the product. Here’s an overview of the things we’ve been working on.

At the risk of sounding like a marketer, Arsenal’s app interface is really important to us. Arsenal provides a lot of technology, but that is only useful if we can find a good way to present and manage it. We’ve been putting a lot of work into user testing lately to make sure the app is as easy and intuitive as possible. This has lead to some redesigns on the timelapse screen, and a rethinking of how focusing is handled in the app. Between now and April, we will continue to make improvements to the interface. As a reminder, the app will be in the Google/Apple stores right before launch.

In the past I’ve worked on software teams that did “continuous deployment.” On one app in particular, we would be pushing out code updates at often as once a day. In the hardware world, updates aren’t nearly as common. (Though we would like them to be) We have a long list of features we want to add to Arsenal after we ship, and making sure our build process, testing process, and firmware deployment process is solid is crucial to allow us to easily develop and push new features.

To that end, Ben and Jack have continued to improve the firmware updater. We decided to switch from a mirrored partition setup to a recovery partition and main partition setup. This allows us to dedicate more disk space to caching, while keeping the same resiliency as before. We’ve also been expanding our build/deployment process to allow for more variants of the code. The idea here is to allow various beta/feature releases so individual features can be tested on certain units before they go out in the main release.

As mentioned in previous updates, at our manufacturer Arsenal units will be flashed and automatically tested by our “test rig” that we’ve developed. The test rig runs a set of automated tests to exercise every system on the PCB, so we can be sure no units go out with issue. During assembly, an Arsenal unit is connected to the test rig via USB. The test rig automatically boots a small version of linux over USB, runs our test software, and flashes the firmware. If any tests fail, that Arsenal won’t make it to customers.

Since the last update, we’ve made a lot of improvements to our test suite, improved the performance and reliability of the test rig, and built out enough test rigs that they won’t be the bottleneck on the production line. This has been a major effort that will pay great dividends in quality and speed.

Along with the test suite, we’ve improved our unit tracking system. (Not the most exciting part of the process) The unit tracking tags the hardware with serial numbers associated back to production lines and dates. This information is useful in making sure any production issues can be easily tracked back to units before they go out. Part of this process also involves printing custom labels for each box that contains the serial tracking info as well. The label software also lists which cables are included with each box for easier fulfillment in the future.

Jack, our embedded/linux developer has been crucial in getting everything running on our custom hardware. Recently he’s been working on our bluetooth/wifi drivers to help support better power management and some previously unsupported network configurations. These new changes should make Arsenal more resilient in areas with a lot of wifi/bluetooth congestion.

Since we previously pushed our ship date back we’ve also taken time to bring Arsenal’s linux version up to date with the latest linux kernel. Part of that pull brought in security updates and driver improvements.

Arsenal has a dedicated power management chip on board. The chip controls things like charging, USB power negotiation, and providing regulated power lines to the processor and other Arsenal systems. There are literally hundreds of options that can be configured on the power management. Phillip has been working his way through these software configurable parameters to help improve things like power management and battery life. Some of these options also control how the power button behaves for entering handheld mode, recovery mode, etc...

The enclosures have been through a lot more iterations than we expected. We’ve been squeezing in a few last minute improvements before enclosure production starts next week. Currently the molds are out having the outside textured. This involves hitting the molds with a high powered laser to etch the external texture into the mold. Once those are back, we’ll start making enclosures for the production runs.

We’ve also been working on improving our auto-exposure algorithm used in the holy grail timelapse section. We recently built a new data set used to train this model. We’re still working with the new dataset, but we expect a good improvement over the previous model.

Launching Arsenal is really just step one. Part of making Arsenal a success is having a good support team and documentation to get questions answered, improvements made, etc.. To that end, we’ve started expanding our customer support team by bringing on two new associates, Matt and Mike, who will augment our existing team of Kristen, Rachael, Meg, and Nate. Both Matt and Mike have a BA in photography, extensive background in the field, and really know the industry well.

We’ve also started working on building out the rest of the support infrastructure. We envision that to include online video tutorials, help guides/manuals, and perhaps forums in addition to the online support the team will offer. These will all be available closer to our launch in April.

Lastly, I put together a walk-through video for Arsenal. We’ve been really heads down getting ready for production, and I apologize for not having more content ready right now. We have a trip scheduled in a few weeks to go shoot some more demo footage in the field, and the plan is to include handheld mode, some outside portraits, and more comparisons between Arsenal’s results and what you could get with Auto mode. Look for that video mid March.

The video ended up a bit long, but I figured a detailed dive into the app would be good for those who are interested.

A few things I forgot to show in the video: 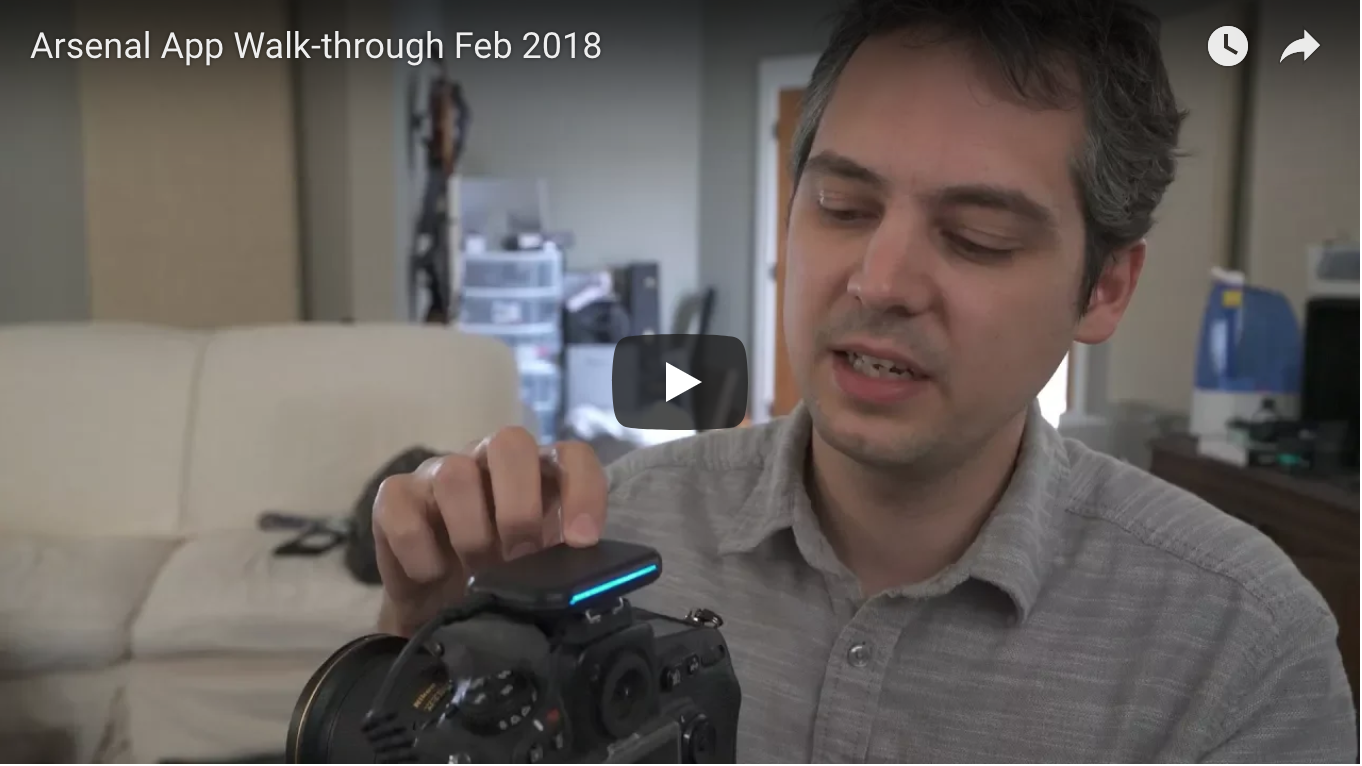 So many things need to come together for a first large production run. Thanks to the Arsenal team for the extremely hard work they’ve put in getting everything ready for production. It’s been amazing to see the progression of Arsenal from Kickstarter through to near launch. I believe that Arsenal is going to absolutely delight customers and that’s very exciting.

I’m also very excited for the future. Initially that’s because we’ll be launching Arsenal soon and I can’t wait to get Arsenal in more people’s hands and see how they use it. The future also excites me because we have so many great features, enhancements, support for new cameras, etc. planned that we’ll be working on after launch and rolling out in future firmware updates.

2018 is off to a great start and I’m very optimistic it’s going to be a great year for Arsenal users. Thanks to everyone for the patience and support.

Hey everyone, Ryan here. This update will be a bit more concise than the last few as we’re…

Hey everyone, Ryan here. Happy new year. The Arsenal team and I have been working around the clock to…